Carnage is one of Marvel most crazed and deranged villains. Once a killer known as Cletus Kasady, he transformed into Carnage after mixing blood with Eddie Brock. The symbiote magnified Kasady’s psychotic nature making him even less mentally stable, and consequently even more dangerous. Unlike Venom, Carnage is a singular creature… Referring to himself as “I” instead of “We”, because the symbiote has merged into Kasady’s bloodstream.

Queen Studios 1/1 scale Carnage life-size bust  brings the infamous Symbiote to life. The monster’s eyes are bone white, his mouth is wide open, and his tongue is whipping out, ready to catch his next victim. The bust stands at 75cm tall and is modelled from a variant cover of issue no.5 of the superb Marvel series Absolute Carnage. Queen Studios are excited to tell you guys that this full-size 1/1 Carnage bust will be a counterpart to our 1/1 Venom Life-size bust. Why not collect them both for the ultimate showdown.

Check out Carnage below: 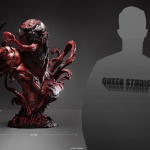 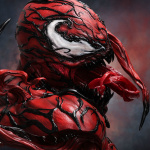 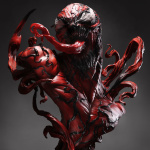 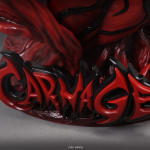 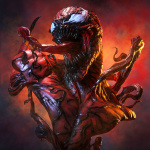 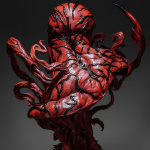 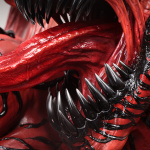 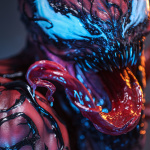 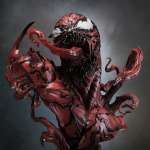 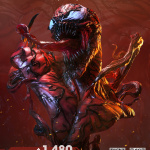 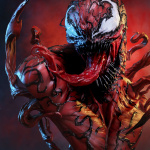 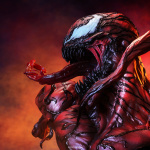 This Queen Studios 1/1 scale Carnage life-size bust is carefully crefated from polystone and painted to near perfection to capture Carnage’s unique crimson color. The base of this bust marks a new direction compared to Queen Studios’ other life-size busts. Queen Studios’ artists have merged the symbiote body into the base, giving the bust the effect of the base being consumed by Carnage just like the character in the comics. Finally, Carnage’s name has been written on the front of the base with the same style as the cover of the Marvel series Absolute Carnage.

Preorders for Carnage are now officially open. Unfortunately, the bust will cost $1,480. Wowza. Better start saving. If you’re unfamiliar with the amazing work by Queen Studios, head over to their website for more stunning statues and collectibles.

What do you think of this incredible statue? Let us know your thoughts in the comments. Be sure to check out more collectible news right here.

Andy Serkis directs Venom: Let There Be Carnage which stars Tom Hardy as Eddie Brock/Venom, with Michelle Williams returning as Anne Weying. The villainous Carnage will be played by Woody Harrelson who will co-star alongside Naomie Harris, Stephen Graham and Sean Delaney.

Venom: Let There Be Carnage is in cinemas now!

Meet The Characters Of RESIDENT EVIL: WELCOME TO RACCOON CITY

Season 3 Of TITANS Confirmed To Debut On NETFLIX In The UK On December 8, 2021

The Multiverse Is Breaking Down In New SPIDER-MAN: NO WAY HOME Trailer