In the past we’ve had the great pleasure of working with the masterminds behind the adventurous UK comic series Snow: The Dawn. Following their world expanding graphic novel The Eventide they are dipping back in to the world with a brand new tale entitled Whistleblower.

A new one shot by writer Will Gillingham with illustration and colours by Stuart McGarey this new story promises to open up their already intriguing world even further. Whilst Gillingham is new to this world McGarey is no stranger to Snow having worked on the “Vices” chapter in The Eventide (reviewed here).

The synopsis for Whistleblower teases further decay in the order of dystopian London:

London, 2079. Surrounded on all sides by dam walls, the last citizens on Earth are contending with claustrophobia. Cracks are appearing in the veneer of order, and moralities are as grey as the encroaching sea.
And in the back streets of Islington, a man with no memory wakes up in the road. A fresh tattoo on his hand brands him a criminal, but for what crime, he does not know. As a new threat looms in the underbelly of London, he either needs to stand and run, or be swallowed by the city, body and soul.

The one shot will be published by Black Spot Comics. The new home of all things Snow: The Dawn. Be sure to check them out on social media @blackspotcomics.
Intrigued? Well you can check out the cover art and first two pages of Whistleblower exclusively below. A new page from the story will be released each Friday at 18:00GMT exclusively at https://tapas.io/series/whistleblower.
Head over there now and be sure to subscribe and follow the story as it continues! 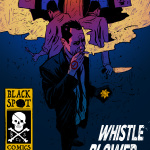 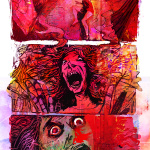 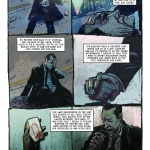 For more  on Snow: The Dawn checkout https://snowtheuniverse.wordpress.com.

BOOM! Studios Announces a Pair of New Series With BEHOLD, BEHEMOTH and SPECS

Here’s Everything Coming to MUBI In the UK This August