Skip to content
Neil reviews the fourth episode of Amazon Prime Video's THE BOYS season 2. The episode is available to stream now. 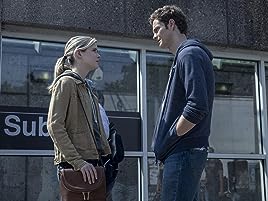 Road trip!  The Boys head to North Carolina to follow a lead on a mysterious Supe named Liberty.  And did you know a person’s choice of candy bars might tell you if they’re a serial killer?  Watch and learn the warning signs!  This episode could save your life!

This week The Boys moves from it’s binge-release strategy to instead release weekly episodes. We left our heroes in pretty precarious positions in episode three as plenty of truths had been revealed.

The episode picks up with homeland (Anthony Starr) continuing to search for his place in the new landscape. Starr is doing an excellent job of portraying this newly shaken version of the character. On the one hand he spends this episode grappling with ghosts from his past. On the other hand he has Stormfront (Aya Cash) squarely in his sights over her previous actions.

The season is building towards a potentially huge shake-up in the status quo. At this stage it’s incredibly difficult to call but any number of characters could cross sides in order to advance their own agendas.

There are a number of deplorable actions this week, almost all of them carried out by Homelander. It seems that he’s not only on a journey of self-destruction. He is also intent on taking down everyone else with him. Some of his actions this week will absolutely resonate with members of the audience as they did with me.

But with Stormfront flying around riling up crowds of anti-super protestors it’s hard to know who is the worst-of-the-worst here.

There’s plenty of drama to get through in this week’s episode. Billy Butcher (Karl Urban) finally makes a play to rescue his wife (Shantel VanSanten). that obviously means reconciling the fact she had a child with Homelander which is a huge emotional development for Billy. Or so it seems. It’s heartbreaking and exciting to see the series really dig in to his backstory more.

This episode also puts a full stop on the relationship between Hughie (Jack Quaid) and Starlight (Erin Moriarty). These two have gone through a fair amount of heartbreak over the course of the series to-date. The fact Starlight chooses to walk away feels like a step forward in her character’s emotional development. It also feels right for the story. As Hughie gets deeper involved with The Boys he needs to experience the separation from life that brings.

That’s not to say that their last adventure together (for now) doesn’t bring some levity to the episode. Whilst they uncover some pretty dark material on Stormfront their journey across country is hilarious. It’s refreshing for the series to show these characters in a moment of pure innocent joy.

Given the way these storylines are going, this may be the last happy moment any of these characters enjoys for a while…

The Boys season 2 continues a blinding run of episodes. Full of twists, turns and reveals which are sure to complicate matters for both The Seven and Billy Butcher’s gang going forwards.

The even more intense, more insane season two finds The Boys on the run from the law, hunted by the Supes, and desperately trying to regroup and fight back against Vought. In hiding, Hughie (Jack Quaid), Mother’s Milk (Laz Alonso), Frenchie (Tomer Capon) and Kimiko (Karen Fukuhara) try to adjust to a new normal, with Butcher (Karl Urban) nowhere to be found. Meanwhile, Starlight (Erin Moriarty) must navigate her place in The Seven as Homelander (Antony Starr) sets his sights on taking complete control. His power is threatened with the addition of Stormfront (Aya Cash), a social media-savvy new Supe, who has an agenda of her own.  On top of that, the Supervillain threat takes centre stage and makes waves as Vought seeks to capitalize on the nation’s paranoia.

Neil is the GYCO Editorial Chief. He has a BA in Film & TV and an MA in Scriptwriting; he currently works 9-5 as an office manager and 5-9 as a reviewer/web designer. He has been subscribing to comics for around nine years but has been reading them as long as he can remember.

KERRY AND THE KNIGHT OF THE FOREST (2020) review

Watch the promo for the next brand new episode of

FULL GALLERY AT LINK IN BIO. Check out the full p

A lovey gift has just arrived from our friends at

So, WandaVision theories based on the trailer...

WATCH NOW AT LINK IN BIO. The first trailer for @

Another #BatmanDay shot of @benaffleck, this time

HBO Max has shared a new look at @benaffleck in co

The first Batman videogame we ever owned! #batman

What about your favourite animated versions of Bat

Today is #BatmanDay and we want to hear what the D

The DC Universe app is changing! From January 2021

We see you @kaleycuoco and we’re ready! 😉 #h

Confirmed: SUPERGIRL to end with season 6