After the loss of Bongo Comics, the long running publishing company that focused on The Simpsons, Matt Groening has announced that Bapper Books, Groening’s new company, will debut at San Diego Comic Con 2019.

The new company will feature various stories based on Groening’s latest project, Disenchantment, which will receive a first-look, exclusive, hardcover copy at SDCC.

Disenchantment: Untold Tales will tell the untold stories of the princess Bean, her elf companion Elfo, and her demon Luci. Groening has described his new book as a “sideways comic–full of your favorite fantasy freaks doing stuff we couldn’t fit into the TV show.”

The debut publication won’t be the only thing available to fans at Booth #2519.

Fans can expect a full range of Disenchantment merchandise ranging from T-shirts, calendars, plushes, and an exclusive Luci cloisonne pin.

Disenchantment is also receiving a second season which is currently in the works. Part 2 of season 1 will begin streaming in September 2019. 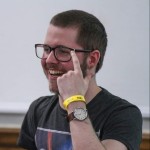 Take a look at highlights from the DC FanDome sche

What is Tron: Ares? @jameskclister97 investigates

Check out a new image of Miles Morales in action.

An interesting peek behind-the-scenes at the socia

FULL STORY AT LINK IN BIO. Get your first look at

FULL PREVIEW AT LINK IN BIO. @boomstudios has giv

FULL STORY AT LINK IN BIO. Join us in welcoming @